The Springfield Baseball League needs an easier way for their 20 coaches to choose their teams amongst 250 players. See how they can do it.

Getting 20 coaches together to select players for their youth sports league.

The group can use OnlineDraft. All partners can rank the players before the draft. The draft can start whenever they want and can be finished as quickly as coaches can make their picks. Data is updated immediate during the draft so everyone knows which players have been taken and which are still available. After the draft results are available to everyone.

In Person or Remote Drafts?

Many youth sports league drafts are In Person. That is great -- we fully support in person drafts. OnlineDraft will make the setup and draft preparation easy for the commissioner AND all of the coaches can pre-rank their players and get ready as well. When it is time to draft, you can connect your laptop to a tv and/or coaches can have their own devices and have the draft data updated continuously as the draft progresses. Everyone will know who has been drafted, who is still available, and whose turn it is. OnlineDraft will simplify the process whether your Draft is In Person, Remote, or a combination of the two. 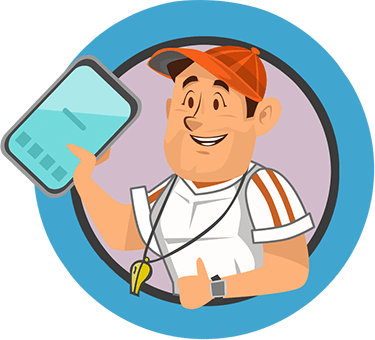 How does it work?

Once you create your free account, click on the start group button. Select a name and continue.

Importing players is a snap... 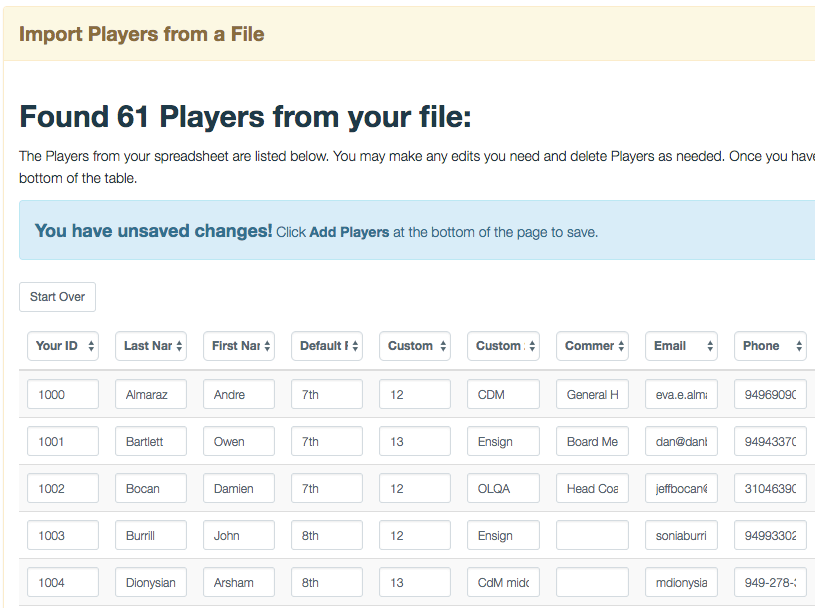 With your players added, it is now time to add your coaches. Add coaches with a name and email address. You can also add coaches with an invite link or import them from a spreadsheet. 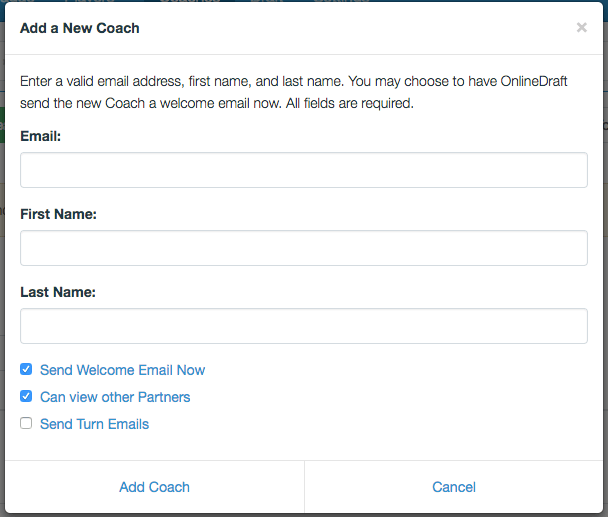 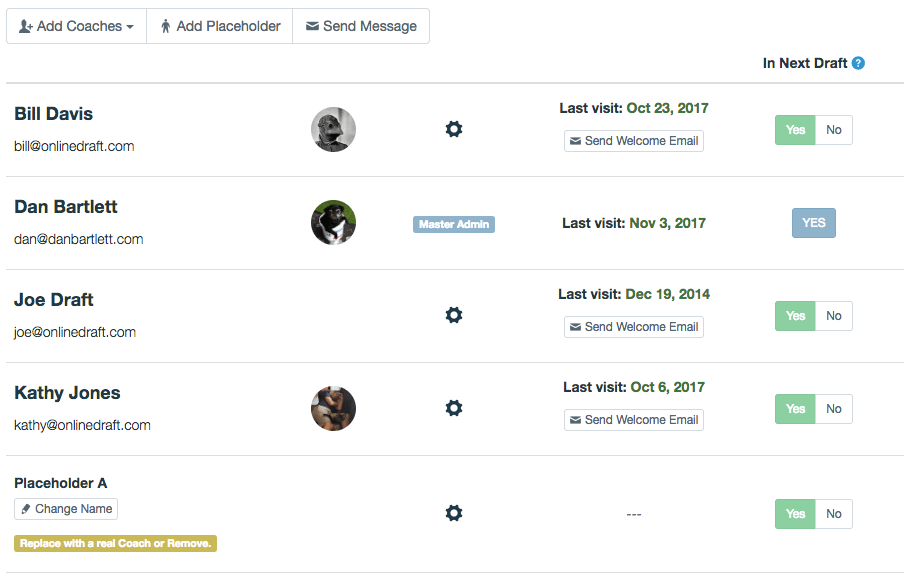 OK, now you have added your players and coaches -- time to set up the draft. Start with the number of picks. Typically this is one pick per player. 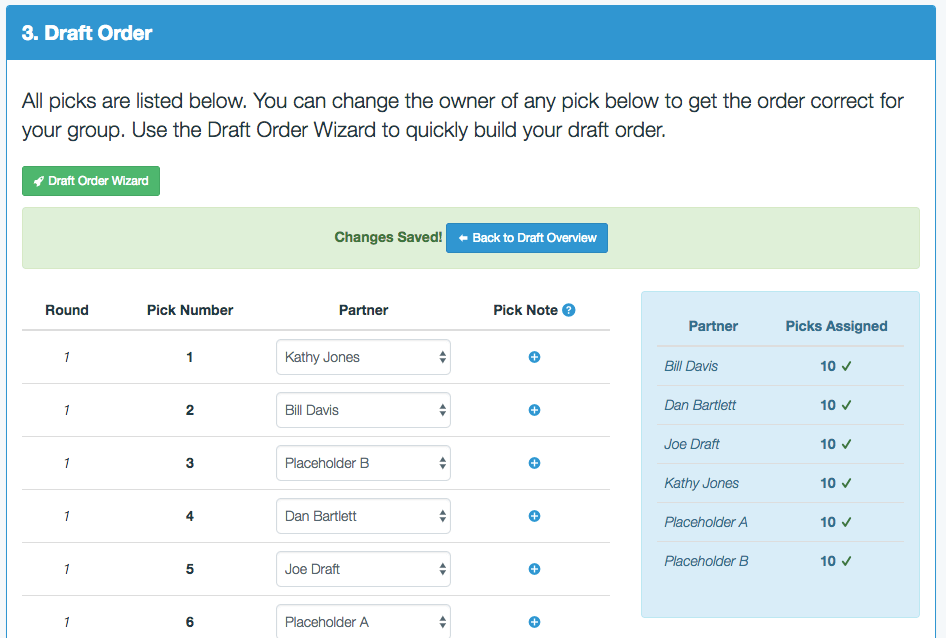 Every coach has the opportunity to rank the players before the draft begins. Ranking the players makes the draft easier for you and makes the selection process faster. You do not have to chose your highest ranking player during the draft, instead it can be your guide when it is your turn. Also, partners who choose AutoDraft and do not attend the draft will have their selections made instantly from this list.

Your draft can start whenever you like. If everyone shows up early then start early. If you need to push it back 15 minutes that is fine too.

Now the fun part! The Group Administrator has just started the draft. It is Kathy's turn. The key parts of her screen turn green and she selects her first player from the AVAILABLE section. Notice her rank in the first column... 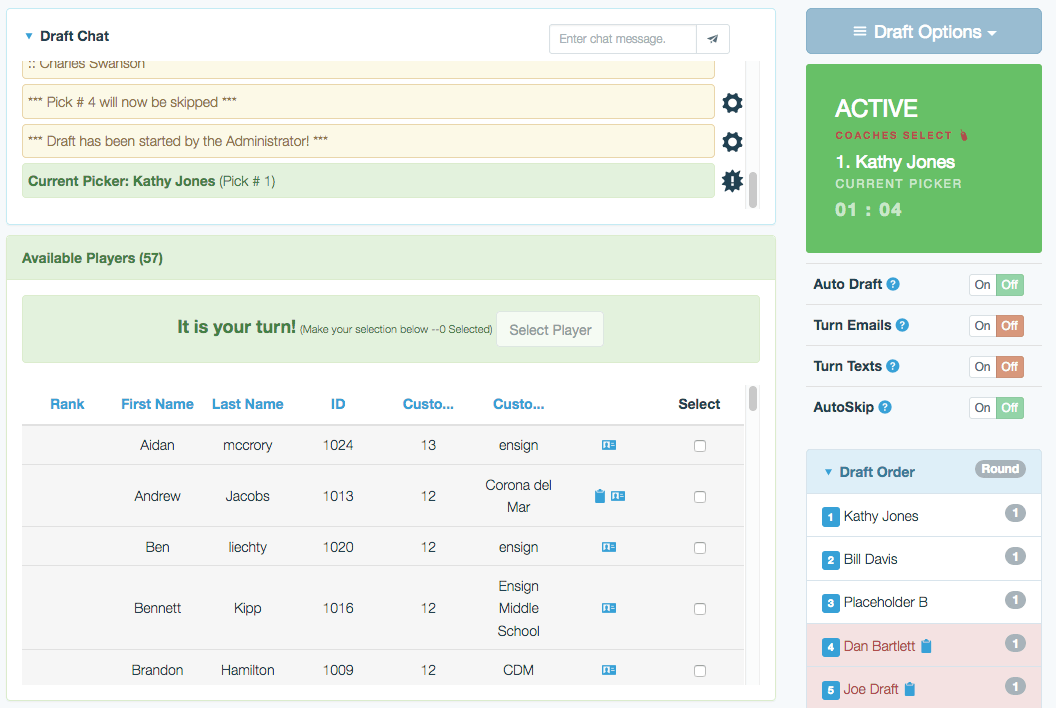 Kathy has made her first pick... Everyone is notified as the draft progresses.

The Group Administrator can pause the draft at any point to...

...make a selection for a coach 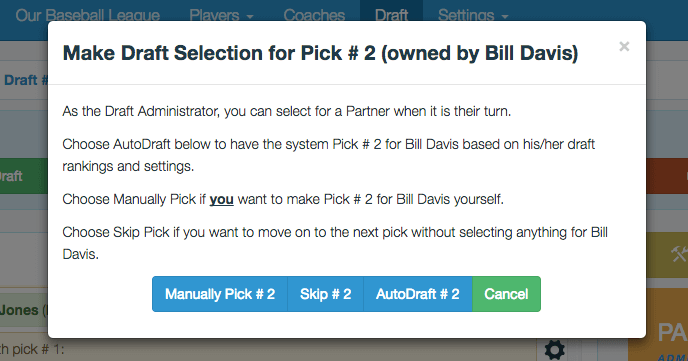 The group can use the Message Board to offer advice, encouragement, or banter.

Any partner can turn on or off AutoDraft. If you want to make your first picks but don't care as much about the last picks you can switch to AutoDraft and be done. If you don't want to attend at all, rank your games and set AutoDraft on and that's it. Turn on or off Turn Emails to receive an email whenever it is your turn. This is a great feature for groups who want to draft over several days. Coaches can also choose to be notified when it is their turn via email or text. 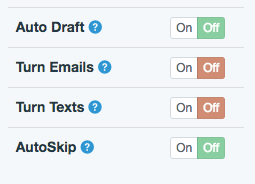 All the picks have been made! The Draft is Over! We send out an email and the results are available immediately.

View the results in our powerful Navigator. Filter by Coach for team "rosters". The Group Administrator can assign players before the draft begins and move players around after the draft as needed. Easy! 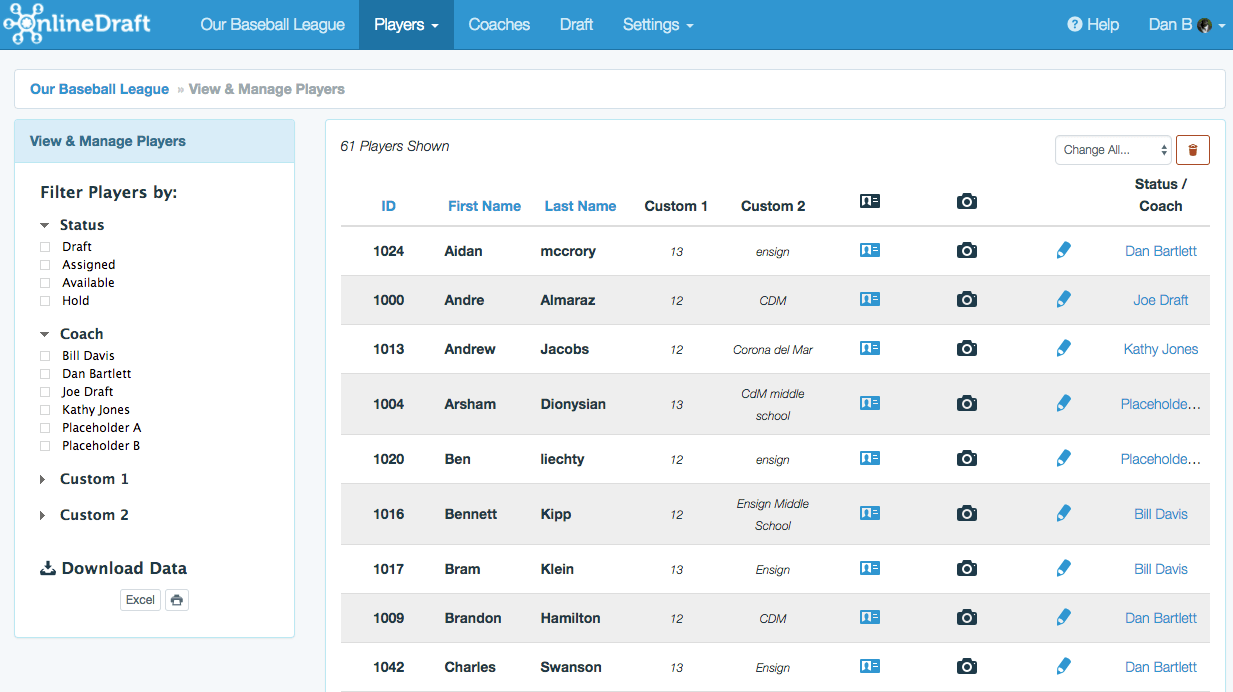 You and your group can also use our Draft Board. If you are meeting in person to conduct your draft, it is great to project the Draft Board onto a screen for everyone to see. The Draft Board updates automatically as your draft progresses. You can also download your Draft Board to a spreadsheet before your draft if you want to keep track of the draft yourself. 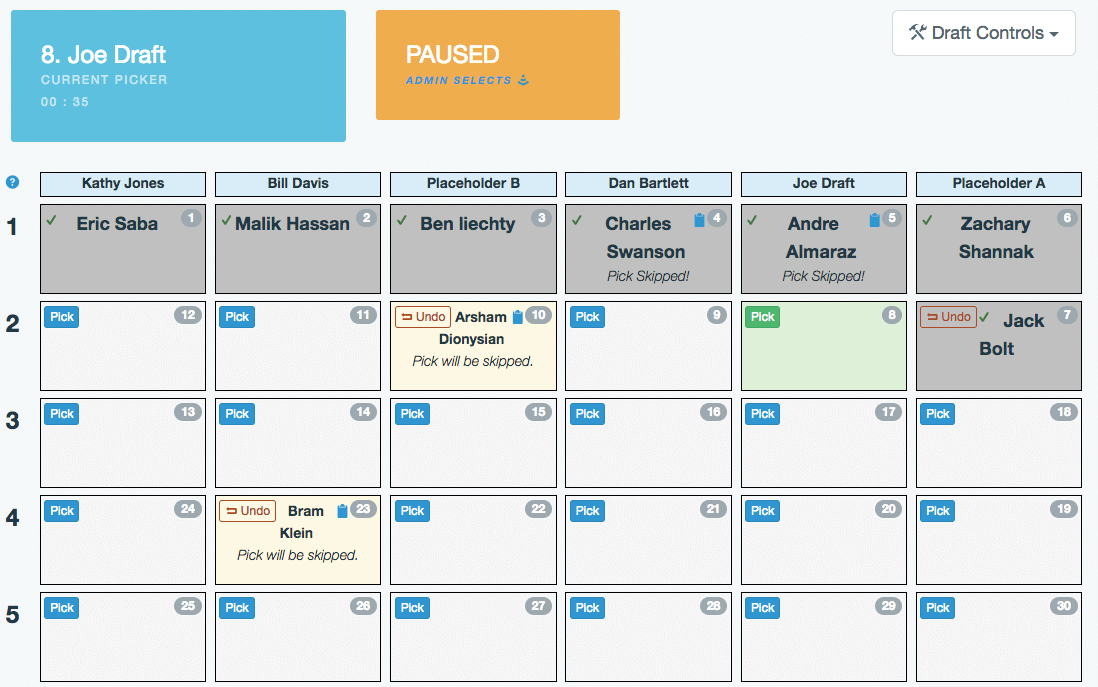 What is the Draft Board?

I am a coach, what should I expect with OnlineDraft?

Testimonials
"We used online draft for our NJB basketball draft and our Bronco Baseball league draft. The set up was fast, simple, and so efficient!!! At the actual draft I connected my laptop to a tv and made the picks. It was very quick and easy to assign each player, once the Manager's made their selections. I have conducted at least 50 youth sports drafts over the years and using OnlineDraft was a phenomenal improvement. I used to spend hours setting everything up and then at the actual Draft, my old system was very cumbersome. I would highly encourage utilizing, and recommend OnlineDraft for anyone who has ever run, or been involved with any type of draft format. This program is AWESOME!!!"

"OnlineDraft and its SportsEngine Integration reduces the time and effort required of our league reps and coaches, who are all volunteers, to get a season started by over 50% allowing them to focus on basketball and not manual, one by one player rostering. It also speeds up our player draft by at least 30 minutes per draft."

"We used OnlineDraft for our kids' Pony league drafts in a couple divisions this year and it was fantastic! Very easy to set up, great display during the draft to keep everyone on task, and simple to manage the process and disseminate the team information after it was completed. This is a no-brainer for youth leagues!"

"This draft tool is fantastic! I just participated in a draft for a kids basketball league and I did the entire thing sitting in seat 30D while flying between Los Angeles and New York City. The draft went very smoothly and it was easy to follow and sort the players and make the selections. This was such a fantastic tool to use for a kids' league and I could imagine it would be great for working out other details like vacation home dates and more. Well done, OnlineDraft!!"

"This was my first time as a league director and after doing some research I decided to use OnlineDraft. What a great decision, it was pretty simple to get all set up and running within 1 day of the draft. The draft board looks great when displayed on a big screen and it only took the coaches a few minutes to get orientated and get rolling. I will be using this for my future online drafts!"